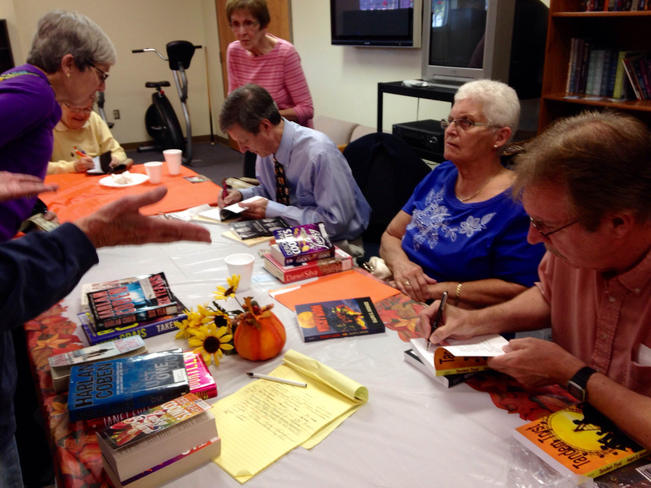 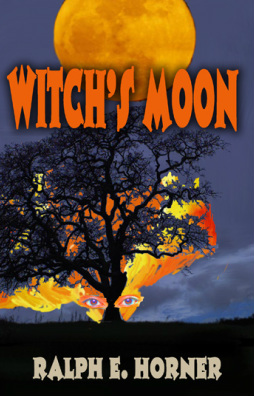 A short synopsis of Witch's Moon
In 1680 Diehla Thorne places a curse upon Jeremiah Hillery's descendants when the judge condemns her to be burned. She swears 'All the judges male descendants are to die before the age of forty until she returns in three hundred years.' In modern time, when Diehla's spirit reappears to kill Joe Hillery, the last of the judge's line, he challenges the witch with a bet that she can't refuse. She sends Joe back three hundred years where he has only two days to find someone brave enough to touch the witch's ring of power on the finger of her former self. If Joe can not accomplish this task he will die and Diehla will claim his fiancee's body to continue living her evil life in modern times. In unfamiliar colonial time, Joe matches wits with superstitious Puritans as well as cauldron stirring crones, evil temptresses, goblins and demons alike, while desperately trying to find someone who will do the unthinkable for him.


Witch's Moon reviews:
Ralph E. Horner's latest book, WITCH'S MOON is a gentle Gothic Horror. It is a Cleverly written Time Travel, where the modern-day Joe Hillery Is determined to go back in time to alter the outcome of a witch's curse against all of Judge Jeremiah Hillery's descendants. Joe is the last in the bloodline unless he can find a way to break the curse. Once you begin, you'll not want to set this book down. I highly recommend it.
JoEllen Conger Reviews.

If you enjoy a great time travel story complete with witchcraft and suspense, then this is the novel for you. I first became familiar with Ralph E. Horner’s work when I read his debut time travel novel, Tandem Tryst, and fell in love with the story, the characters, and the writing. Horne does a phenomenal job making his characters extremely real in both of his novels, taking the reader on a journey across time as we fall in love with them and become a part of the story ourselves. Both Joe Hillery and Diehla Thorne, in Witch’s Moon, are exceptionally well written characters, and in truth, Diehla, a condemned witch, is as scary to me now as she probably would have been perceived during the puritan witch trials, if she were real. A storybook character that actually scares me is one for the history books, and I loved that she was so real and vivid, as was she coven. It is vastly apparent that Horner has done much research on puritan times and witchcraft, and let’s just say I’m very glad to have been born in this era. Witchcraft is a scary business, and Horner keeps it very real as he follows the coven into the woods for their satanic rituals. The sexual deviances of witches and the satanic all together are not overlooked in this novel, and so I wouldn’t say this is a novel for the young. I don’t even think I’d let my YA read it, though it is very real, as some of the descriptions made me a bit ill.

Joe Hillery is a great male lead, and I enjoyed following his plight as he attempts to not only fit in with the puritans with his 20th century clothes and money, but all infiltrate the coven and bring along a puritan to touch the ring of the most powerful witch in “the world.” Parts of it were funny, but most of it was quite serious, as it should be with his life on the line as well as that of his beloved. All in all, I really enjoyed this novel, though a touch morbid (as it should be), and am looking forward to more of Horner’s work.
Shana 'A Book Vacation'.


Witch’s Moon by Ralph E. Horner,
Wings, 280 pages, $16.95 paperback.
Ralph Horner’s previous novel, “Tandem Tryst,” took readers back to
theWorld’sColumbian Exposition of 1893 to good and engaging effect.
“Witch’sMoon” goes back even further, to 1680 to be precise, a time of
fearsome “witches.” One of those, Diehla Thorne, puts a curse on the
family of Judge Jeremiah Hillery, who has sentenced her to be burned at the stake. The curse?
Basically that “accidents, diseases, even murders”would plague Hillery’s descendants forever, and they would have one “thing in common, not one of them lived to the ripe old age of forty. Not even one, for three centuries.” That news comes from 1980 and a relatively young fellow(he’s 25) named Joe Hillery, who knows his inevitable fate. But he gets a chance to end the curse by traveling back three hundred years and touching a witch’s ring. I have never been a fan of Gothic novels, and time travel leaves me cold, but Horner is so obviously enjoying himself on these pages —“She reminded him of a Siamese cat. … Her large bewitching
eyes held him as she spoke”—that he provides a satisfyingly spooky trip.
Rick Kogan is a Tribune senior writer and columnist.

Ralph E. Horner with his first published novel Tandem Tryst, from Southtown May 2009. 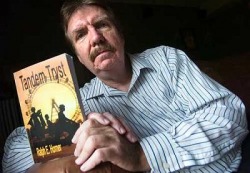 This Time-Travel Mystery Romance would be a great companion to ‘The Devil in White City’ by Eric Larson because of The World Columbian Exposition setting. In fact Tandem Tryst is now being sold at the gift store and on-line at the Chicago Architecture Foundation where they conduct the White City tours. Available in paperback (271 pages) at Amazon.com, at Bookies 103rd and Western Chicago, or at Wings-Press.com in paperback or PDF electronic download (320 pages).

Short synopsis of Tandem Tryst
An enchanted ring sends Jeff back one hundred years to White City. There he meets Melody, the soul of his late wife. Although he has several obstacles to clear, like Melody's boyfriend, Jeff feels he has a second chance with the love that was taken prematurely. However, dark forces are at work around him, with a disguised woman stalker who will stop at nothing to steal his ring. 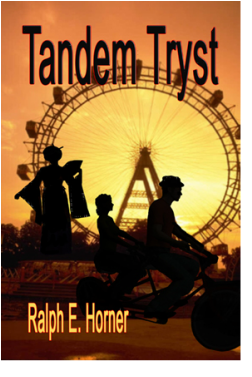 Tandem Tryst is a marvelous story that mesmerized me in the most wonderful way. It’s an excellent novel I highly recommend reading.
Zee – Fire Page Reviews

Tandem Tryst is a wonderful time travel novel! I really liked the idea behind the story. Full of mystery and intrigue.
Shanna – A Book Vacation

I do think that Tandem Tryst is a good novel for people interested in time-travel, especially if they’re also a fan of romance. This was a very cute story.
Juliette Brandt - Reviewer & Editor for Crescent Moon Press


All four books are available on Amazon, Barnes & Noble, and Wings Press. ebook also available on Kindle and Nook.